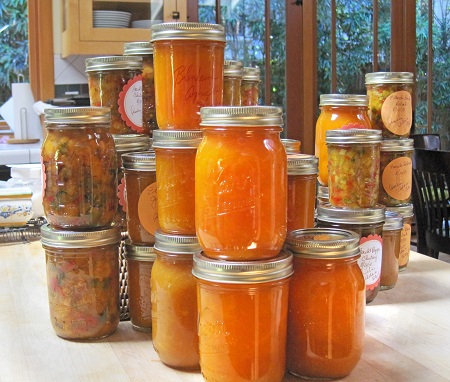 Funny how an idea seems to create buzz everywhere at once. Take canning, for example. I’ve been in a preserving frenzy all season and not done yet.
How about you?

I’ve jammed for ages, but have to admit the canning part with all its caveats made me a little edgy. I wanted to get to that comfort zone where I could “put up” ten pounds of tomatoes in a couple hours and move on with my day. I bought a new canning pot

,  stocked up on jars and lids

, and took a couple of classes by a master canner and a confectioner.

Here’s what I discovered. My preserving style echoes the way I cook: simply and to showcase the main ingredient’s natural flavors. I keep the ingredient list short and don’t use many pantry add-ins, “seasoning” peach chutney, for instance, with just enough fresh poblanos, anaheims, and jalapenos for interesting counterpoint. 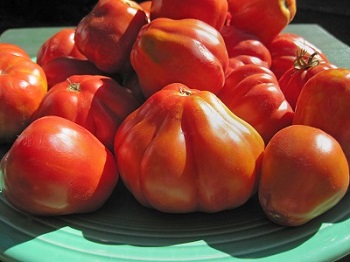 For sweet preserves, I take the sugar as low as possible to still get jam, not sauce. Two-thirds to 3/4 cup sugar, instead of the traditional one cup or even one pound (!) per net pound fruit (after peeling and seeding), plus a good splash of lemon or lime juice, is about right to capture summer in a jar.

For best flavor and value, use what’s locally abundant. For me, July was vibrant Blenheim apricots; August, buttery Elberta peaches; and now September is prime time for tomatoes, which are often richer-tasting in the late season and yield more flavorful canned goods to pull out come winter. I especially like meaty tomato varieties, such as the Costoluto Genovese I get from Coastal Farms in Santa Paula, CA (shown above). 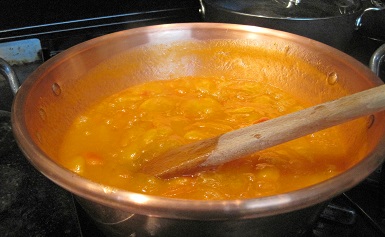 I’ve realized too, there’s a zen quality to this venerable practice—you won’t really appreciate the “fruits” of your preserving efforts until the fresh version’s season has passed.

recipe index is now live on cookbookrecipedatabase.com, along with two of my favorite seasonal recipes (see my trick with hard squashes!). And, if you haven’t already, please follow me on Twitter and let’s be friends on Facebook.

By now you may have noticed my letter’s new look and format. What do you think?

I’ll close with this—please support your local, small-production egg farmers. My car’s bumper sticker reads “Pay the farmer or pay the doctor.” Apparently, so true when it comes to eggs.