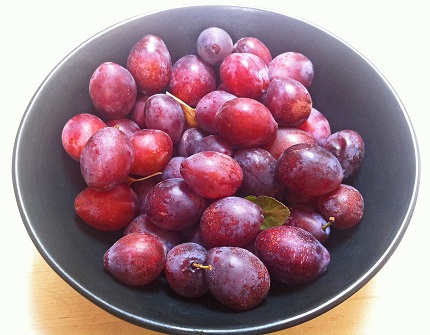 Years ago, I met a woman named Nancy Becker at a food professionals’ conference, specifically in a food memory writing session whose panelists included Jewish cooking expert Joan Nathan. Nancy told of her family’s 20-year quest to recover a food memory that ended when she discovered a recipe for Zwetschgenkuchen, or European Plum Pie, in the cookbook Jewish Holiday Kitchen by Joan Nathan (Schocken, 1979, 1988).

I was so knocked out by how a particular kind of plum, a pie, and the Jewish New Year combined to unlock her poignant family saga (as well as the larger story of Jewish immigrants and the Holocaust) that I immediately set up an interview with her. You can read the resulting article for the Los Angeles Times here.

Although I lost touch with Nancy soon after the story appeared, I think of her pretty much every year around this time when markets overflow with European plums, oval ones familiarly called Italian, French, or prune plums, and round ones such as greengage and mirabelle. They really are European; round varieties such as Santa Rosa, Mariposa, and Elephant Heart originated in Japan. European plums are typically sweeter and have denser flesh than the sweet-tart Japanese types.

And the pie really is European too, an Alsatian and south German classic dessert that Jews in the region commonly baked for Rosh Hashanah, that calls for either a cookie crust (Muerbeteig) or a yeast one (Heifeteig). Nancy made tiny tweaks to Joan’s version of the recipe. I’ve made quite a few more, including substantially reducing the sugar to allow the plums’ natural sweetness to shine. Of course, a little schlag (whipped cream) on top couldn’t hurt. 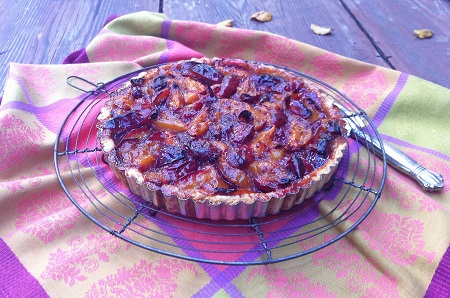 Make the crust: In a medium bowl, stir together flour, sugar, and salt. Using a pastry blender or your fingertips, cut in the butter until the mixture resembles coarse crumbs. Stir together the egg yolk and brandy and stir into the flour-butter mixture until the dough comes together.

Gather the dough into a ball and place in the center of 9-inch pie plate or tart pan with a removable bottom. Use your fingertips to pat the dough evenly into bottom and sides of pan. Refrigerate while you prepare the filling. The crust may be prepared to this point up to a day ahead.

Preheat oven to 375 degrees. Wash, quarter and pit the plums. European plums are not free-stone fruit; the flesh and pit don’t part company easily. Here’s what I do: run a sharp small knife around each plum starting at the stem end so that the knife point reaches all the way to the pit. Give the plum a half turn and repeat the cut. With your fingers, free the plum quarters from the pit. Some plums will release more easily than others. Place plum pieces in a mixing bowl and add the sugar, preserves, brandy, flour, and lemon zest and toss gently to coat.

Pile filling evenly into prepared crust and bake until crust is golden brown and plums are juicy and browned in places, 40 to 50 minutes. The juices may bubble over, so you might want to place a sheet pan on the rack below to catch the juices.