How to Choose Corn and a “Grate” Way to Use It

How to Choose Corn and a “Grate” Way to Use It 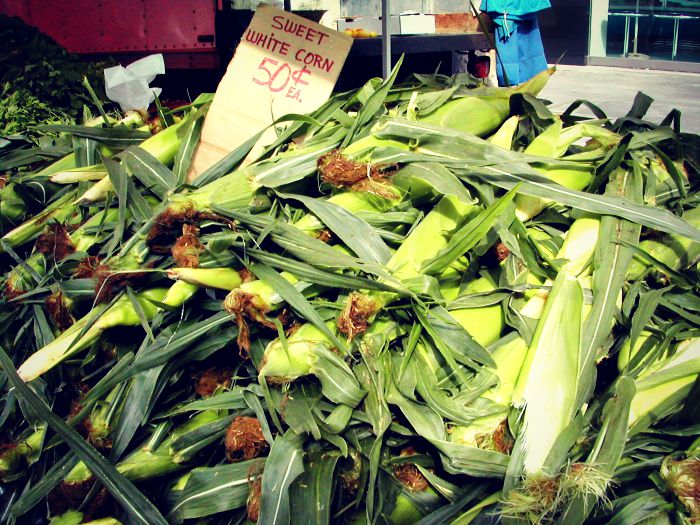 Oh, the joy of full-on corn season! Yellow, white, or calico (my personal fave). Raw, steamed, grilled; on the cob or off; grated and….wait, what?

I’ll get to that in a sec. First, gotta choose the plumpest ears of corn in the bushel. I learned this method from farmer Gloria Tamai, and it’s as close to foolproof as one can get.

There’s no need to pull back the husk to check for quality: Just look for plump ears with husks that are a nice fresh green (although in hot weather, outer husks may get dried and yellowed) and a dark-tipped silk, or tassel. Using both hands and starting from the stem end, work your way up, firmly squeezing the ear to check that it feels full with no gaps, which indicates the kernels are all fully developed, no rows of “teeth” are missing, and no worm damage is present.

At most, take a peek near the silk, which is where a worm would go first (don’t worry if there’s evidence of one at the top; just cut it away when you get home). Kernels should look plump regardless of size or corn variety. Small kernels will be most tender but not necessarily the sweetest. That being said, sweeter white corn tends to have smaller kernels than calico. Shriveled or dry-looking kernels are signs of overly mature corn and will be starchier and have less milk.

Yes, just-picked corn tastes best, but most farmers bring to market within twenty-four hours, which is the best city folks can get. Although some of its sugar will turn to starch, unshucked corn will keep loose in your refrigerator crisper for about a week (remove the silk before storing). Use already-shucked corn within a couple of days. 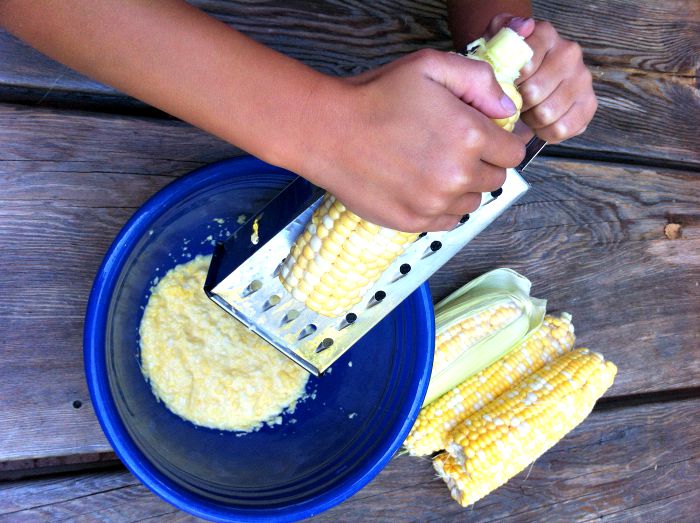 One of the best ways to use a bumper crop of corn is to grate it. This releases the corn’s milk and puts you 20 minutes out from the best creamed corn you’ll ever eat (and doesn’t actually contain dairy or thickeners).

Grating corn is a chore you can delegate to the kids. That’s my granddaughter Delfina taking care of business in the photo above. Using the large holes of a box grater set in a deep bowl, simply grate the corn down to the cob. It will be a bit messy but well worth it. You’ll get about 5 cups milky pulp from eight ears of shucked corn.

Simply heat a little butter or oil in a pot, add a some chopped onion (and celery, if you like), and cook until softened. Stir in the corn, season with salt and white pepper, and cook over medium-low heat about 10 minutes, stirring frequently.  Stir in 1/2 cup stock or water and cook until the corn mixture is thick and fluffy and has lost its raw starchy taste and texture, about 10 minutes more, adding a little more liquid as needed. That’s it. Swoonable.