How to Avoid Tomatoes in Winter

How to Avoid Tomatoes in Winter

It’s one thing for home cooks to swear allegiance to local/seasonal and try to convince stubborn family members who insist on tomatoes in their salad no matter what. But it’s quite another thing when you’re a farmer or restaurateur looking to make a sale. Can you count on your customers being as fully committed to the cause or to be as patient with harvest delays as you are? How far can you push the seasonal envelope without alienating or losing customers?

Nothing draws a line in the “seasonal” sand like the tomato. We’re still a ways away from its true season, but the expectation for year-round tomatoes is so ingrained that chefs and farmers worry that even a temporary absence on plate or market table will drive business elsewhere.

My friend Akasha Richmond, who owns Akasha Restaurant in Culver City, calls herself “freaky about seasonality” and won’t serve a tomato salad out of season. “That’s just sick and wrong,” she says. But when it comes to lunchtime studio execs’ expectations of a slice of tomato on their burger, she’s afraid to disappoint. Uneasy as she is to bump up against her personal picket line, Akasha purchases local hot house and desert tomatoes until summer begins. It’s a reasonable and still local solution in SoCal, where we can push and pull the seasons with reasonably good-tasting results. But if you live in Chicago, think again about value-for-dollar on cotton-like tomatoes. 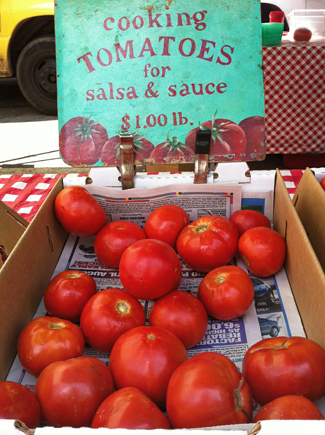 Another friend, Annie Miler, serves seasonal comfort food at Clementine Cafe in Century City. She made the commitment to skip fresh tomatoes in winter when she first opened in 2000. “In the beginning, we took a bit of abuse. Customers would say things like, ‘I could get you some at the supermarket,’ as though we didn’t know where to buy tomatoes. Either we’ve trained our customers or we’ve gained enough confidence, because it doesn’t seem like it’s an issue anymore.”

Speaking of preserving summer’s harvest, Nancy Silverton put her off-season solution on the cover of The Mozza Cookbook. Roasted Roma tomatoes can be frozen and used through the colder months.

Local growers are in a worse pickle. They have no control over the weather. Will it seriously delay the harvest? Ruin it? Adversely affect quality? Actually, farmers worry about who will have the first harvest of any iconic seasonal ingredient. Romeo Coleman of Coleman Family Farm in Carpenteria frets he’ll lose business if he doesn’t have English peas early enough to compete in the market place. (On the other hand, he has no trouble saying no to requests for basil in February and sniffs at hot house producers who offer a blander product lacking in the powerful flavors and aromas that come from the summer sun.)

Here’s the deal: As farmer Phil McGrath says, “Foods taste best grown in their true full season.” Local growers, market-driven chefs, and cooks know it and embrace the opportunity to teach the seasons to customers. But when one’s livelihood is at stake, it’s hard to stay on the knife-edge of passion and teachable moments. And yet, we must.

Here’s what to do when you NEED a caprese or burrata salad NOW. Late-season oranges are super-sweet. When paired with creamy burrata (a decadent mozzarella sac filled with curds and cream), it’s kind of  like a savory Creamsicle, with apologies to the Popsicle company. I used both pink Cara Cara and regular Washington navel oranges in the salad up top. Mizuna (above) or arugula would be great; so would black pepper (I skipped it for the photo) and long curls of orange zest. Olives too….although we’re getting a little far from Creamsicle…

To make enough for 4:

Here’s how to get pretty orange slices: Use a small- to medium-sized serrated knife to cut a thin slice off of the top and bottom of the orange. Stand the orange upright and cut the peel and pith away, tracing the curve of the fruit with your knife to expose the pulp. Turn the orange on its other end, and cut away any peel and pith you may have missed. Lay the orange on its side and cut into crosswise slices, 1/8- to 1/4-inch thick.

Divide orange slices among 4 salad plates. Top with a scoop of burrata. Drizzle with olive oil, season with salt and pepper, and scatter greens over.